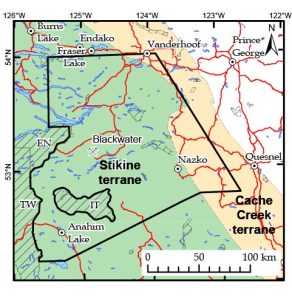 The Interior Plateau region in central BC is highly-prospective for new mineral deposit discovery but is under-explored and difficult to explore effectively because of the significant coverage by glacial till and young volcanic flows. The region has the potential to host a variety of mineral deposit types including porphyry Cu, porphyry Mo and epithermal Au deposits such as Prosperity, Endako and Blackdome, respectively. The discovery of the Blackwater gold deposit (~9 Moz) indicates another deposit type with significant economic potential that can occur in this region. Renewed exploration interest in the Interior Plateau region circa 2013  emphasized the poor quality of the geoscience framework for this region.

This project, supported financially by Geoscience BC, provides new geophysical, geochemical and geological data. Additionally, these new data layers were integrated with existing data, and then re-interpreted, to generate a new and significantly improved geological understanding and data framework for the Interior Plateau Region. The project emphasized those features that control the formation of mineral deposits. The key project objective was to continually improve the geological understanding of the region and to produce new geological maps. This was accomplished through the initial and ongoing data compilations (lithologies, units, age dating, lithogeochemistry, structures, etc…) and followed up with targeted topical studies and field work, ground-truthing, and the acquisition of new age dating, physical property data, lithogeochemistry etc…

Visit the Geoscience BC TREK page for additional map products at: http://www.geosciencebc.com/s/TREK.asp

Kasalka Group volcanic rocks and associated hypabyssal porphyrytic intrusions are preferential exploration targets.  The geology, geochemistry and geochronology of the Kasalka Group is the focus of an MSc thesis completed by Rachel Kim. These Kasalka and equivalent Late Cretaceous volcanic rocks are directly related to, and host, the Blackwater, Newton and Capoose deposits. They are very sparsely mapped throughout the study region, however because their lithologies are similar to Eocene volcanic rocks, it is likely that they are underrepresented on the current maps.

Abstract: As new mineral deposits located at or near-surface becomes exhausted, innovations in exploration are required to ensure the future supply of mineral resources. One of these innovations includes the examination of under-explored regions. The discovery and development of the Blackwater Au-Ag deposit has brought about renewed interest in the Nechako Plateau region. The mineralization at Blackwater is hosted in Late Cretaceous volcanic rocks, that are interpreted to be a part of the Kasalka Group. Historic work and mapping suggest that the Kasalka Group volcanic rocks crop out across the Nechako Plateau region, however, limited data is available for their timing and field descriptions bear strong similarities to other volcanic packages in the region. Furthermore, their context and association with mineralized deposits are limited to the areas immediately proximal to known deposits, and the respective impact on regional metallogeny is not constrained. Detailed and regional mapping, along with multi-faceted sample analyses has allowed for the identification and description of distinct lithologies of the Kasalka Group. High-precision geochronology confirms and identifies several pulses of Kasalka Group volcanism across the Nechako Plateau through Late Cretaceous time, between 82 and 63 Ma. Lithogeochemical characterization has also identified two main compositional groups: a trachyandesite intermediate suite and a high-silica felsic suite. Both compositions may be petrogenetically related, and are also geochemically distinct from older and younger volcanic packages in the region. Integration of age and geochemistry provides key insights to the tectonic setting and provenance of melts that produced the Kasalka Group volcanic rocks. A potential driving factor for Kasalka Group volcanism may be post-subduction melting in continental crust during middle to Late Cretaceous time, instead of a typical subduction-related arc configuration as observed through the Jurassic or along the Coast Plutonic Complex through Cretaceous to Eocene time. Post-subduction crustal thickening may induce melting and result in arc-like volcanic rocks in areas without active subduction or arc magmatism. Similarities to volcanic rocks produced in subduction-related arc settings may indicate that post-subduction magmatic processes in the Cordillera in British Columbia may serve a larger role in the tectono-magmatic evolution and mineral endowment than previous interpretations suggest.

For more on the TREK project, visit the Geoscience BC TREK page at: http://www.geosciencebc.com/s/TREK.asp