A recently released manuscript documents how MDRU students, researchers and collaborators utilized geophysical data to build a highly-constrained 3D structural model of the Guichon Creek Batholith in southern British Columbia, Canada. This batholith is important because it hosts the giant Highland Valley porphyry copper deposits. This new method modeled surfaces from linear magnetic features in aeromagnetic datasets and linked them to generate a regional model.  This structural model provides an improved foundation to reconstruct displacements on faults to determine the original geometries of the various deposits and rock packages. The model also provides a framework for recognizing the fluid pathways that formed the mineral deposits and therefore is an improved basis for mineral exploration decision-making.

This research is a component of the PhD thesis by Guillaume Lesage, is supported by the CMIC Footprint Consortium and Teck Resources Limited, and supervised by Craig Hart and Robert Lee at MDRU. 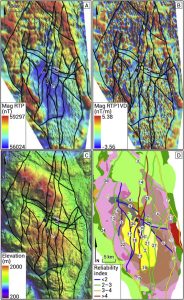 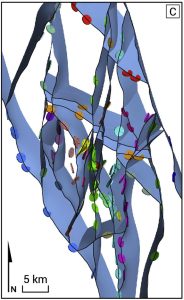 The effects of fault processes on rocks commonly include a lowered magnetic susceptibility and an increased predisposition to erosion. We present a workflow that uses these characteristics of faults and geological observations to interpret a 3D fault network. The location of faults on the topographic surface is first interpreted by a multi-layer lineament mapping method that includes geological and geophysical data sets. We then demonstrate how magnetic intensity data can be used to estimate the dip of fault-related magnetic anomalies by performing 2D inverse modeling along profiles extracted from a magnetic intensity grid. The accuracy of the method is assessed by modeling the dip of low magnetic anomalies of known geometry created in a synthetic 3D magnetic susceptibility model. Modeled dips are consistently accurate to better than 5° for input dips >60°. A requirement of the method, however, is that the magnetic susceptibility contrast between the background field and the magnetic anomaly must be >75% for the anomaly to be accurately modeled. Comparison between fault orientations modeled from magnetic data and measured in the field in the Guichon Creek batholith confirms that the methodology can be successfully applied to brittle faults in real, albeit relatively simple geological environments.