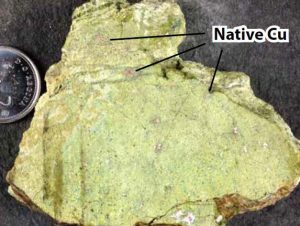 Field mapping by MDRU crews in 2015 in central British Columbia, Canada, resulted in the discovery of a native copper mineral showing (called “Liesegang“).  The mineralized rocks appeared to have about 4% native Cu replacing voids and fractures.  The geochemical results from our exceeded 1% Cu (maximum detection) and 7 gpt Ag.  The nature of the basalt-hosted mineralization, in combination with the associated epidote and surrounding hematitic alteration was interpreted to indicate formation in a volcanic red-bed copper type system.  The observations are documented in a Geoscience BC report (Angen et al. 2016).

The locality was subsequently staked by Parlane Resources Corp. and added onto their Big Bear project.  Parlane credit MDRU with their acquisition and the motivation for their subsequent exploration activities (Press Release 15 Nov. 2016).  The property was purchased by New Gold Corp. for $2.5M CAD in 2017.